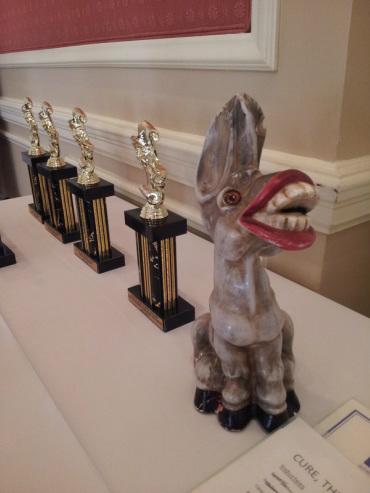 ﻿
​ The Muledog was introduced to Martin Theatre in 1986 before a production of YOU CAN'T TAKE IT WITH YOU. The show required a busy interior set with numerous eccentric props to fill the shelves. The prop crew went on a "prop run" and came back with a prop so ugly that we had to take a second look. A great deal of laughter ensued. Was it a dog with a mule face? Was it a mule sitting like a dog? Was it a demonic test tube experiment gone bad? Bottom line: It was love at first sight. Yes, you might say that the ugly prop deemed the "Muledog" had the face that only a Martin Player could love. From there it took a life of its own and a Martin Player tradition was born!

Through the years, the Muledog has been a part of Martin Theatre history. Here are the Muledog traditions:
Every year at the Theatre Banquet, a senior-to-be is selected to keep the Muledog in their protective possession throughout his/her senior year. In turn, at the end of his/her senior year, this senior selects another senior-to-be as the keeper of the Muledog.
Sadly, in 2014, the actual Muledog (the one seen in the image above)  was accidentally dropped and broke into many pieces. It was painstakingly put back together but is very brittle.  But, WAIT A MINUTE!!.  While Mr. Cure and Mrs. Miller were prop shopping one Saturday afternoon, they came across another Muledog! Albeit an "albino"  Muledog and a smaller version, it was an exact replica of our beloved Muledog!! AMAZING!! At present, the original Muledog is retired and being showcased for prosperity in the theatre room while "Muledog II" is being kept by one of the Martin seniors.